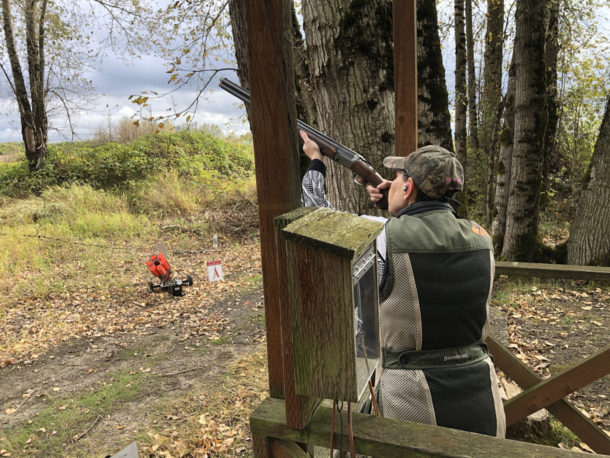 What’s the best way to learn to shoot and sharpen your skills? Clay shooting, of course! With a low-pressure environment, proper instruction, patience, and precision, you can become a crack shot with the right effort. But how do you decide where to start target shooting? Here at Mid-Valley Clays & Shooting School, we offer that comfortable environment you need and some of the best instructors in the Portland and Willamette Valley areas.
Additionally, we offer four types of target shooting: trap shooting, skeet shooting, sporting clays, and five-stand shooting. Each sport is designed to sharpen your skills, and each is enjoyable in its own way. First, let’s go over how they differ from one another.

Trap:
Trap shooting was the first method of clay shooting to be invented. In the 18th century, they would use live birds as targets but eventually switched to glass and clay targets. Little has changed in the way of trap shooting since its invention. Why mess with perfection? We offer singles and doubles here at Mid Valley Clays & Shooting School. Trap shooting is excellent for beginners hoping to get a taste of target shooting. Even if you’ve never held a gun, you can still succeed with some trap shooting training.

Skeet:
Invented in the early 20th century, skeet shooting is more about building your skill with crossing targets. The variety of angles is especially what sets skeet apart from trap shooting. Skeet shooting will help take you to the next level if you’re an intermediate shooter. If you want to get to that next level, contact one of our instructors. They can sharpen your hand-eye coordination in a measured way, step by step.

Sporting Clays:
Sporting clays is one of the most popular shooting games in the US, typically made up of 10-15 stations on a course. Sporting clays were meant to simulate game flushing in the wild. You will rely on the skills you have built on the skeet and trap ranges. This is the perfect environment for hunters to sharpen their eyes before or during bird season.

Five-Stand:
If you like each of the above practices but can’t choose one, five-stand might be for you. A spin-off of sporting clays, five-stand presents shooters with five targets at each of the five stations. It offers excitement, difficulty, and a variety different from any other shooting discipline. It is an excellent method for hunters to get back into the swing of things before their season begins. You’ll get the variety you need to refocus your skills before the real thing, from high fliers to ground grazers. Five-stand can be done by beginners but is especially helpful for advanced shooters and seasoned hunters.

Here at Mid Valley Clays & Shooting School, there’s something for everyone, no matter what type of shotgun shooting you’re interested in. Visit our pro shop for professional help choosing the right gear, then work with an instructor to succeed on the range. Whether skeet, trap, sporting clays, or 5-stand, Mid Valley Clays & Shooting School, Nestled in the Willamette Valley just south of Portland, Oregon, is the place to do it. Consider us for your next “claycation.”

For Mid-Valley Clays and Shooting School, our shotgun instruction program is critical to the success of our business. We take pride in giving shooters of all levels a leg up on their competition or help them establish some clear fundamentals.

To that end, we have certified one new instructor for 2022 – please welcome Doug Daugherty to the instructor crew. Doug is USAYESS-certified and will be working primarily with new and youth shooters.

Some pricing changes for shotgun instruction take effect immediately and apply to the new year: